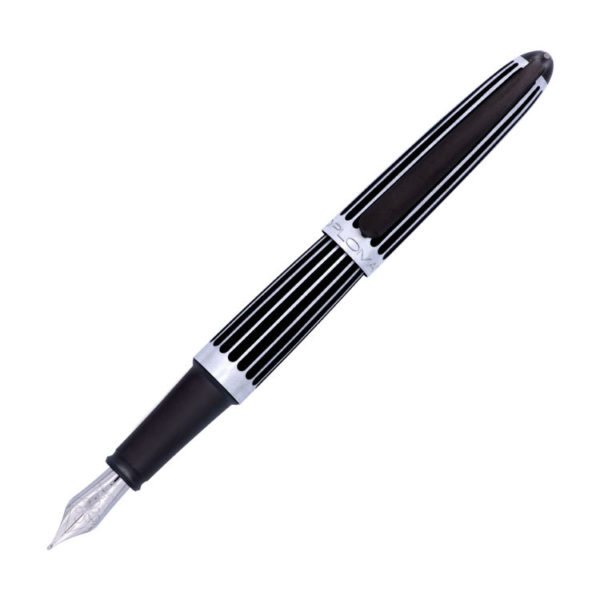 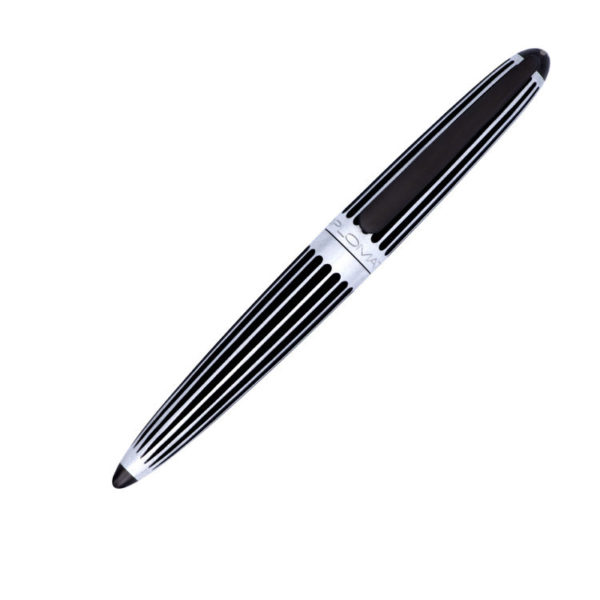 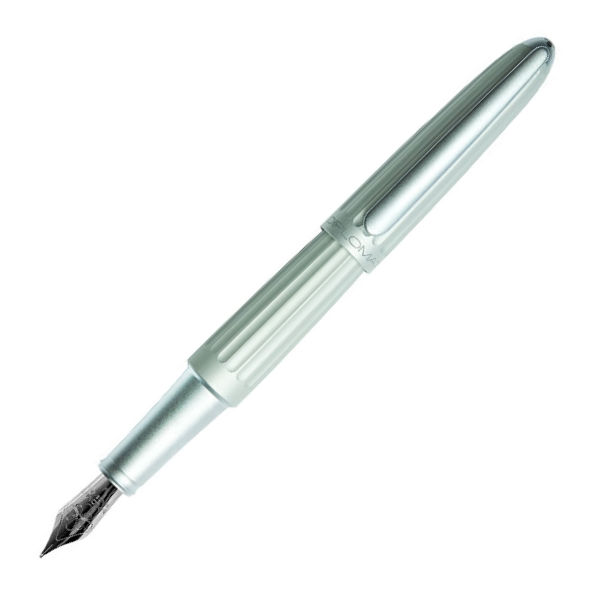 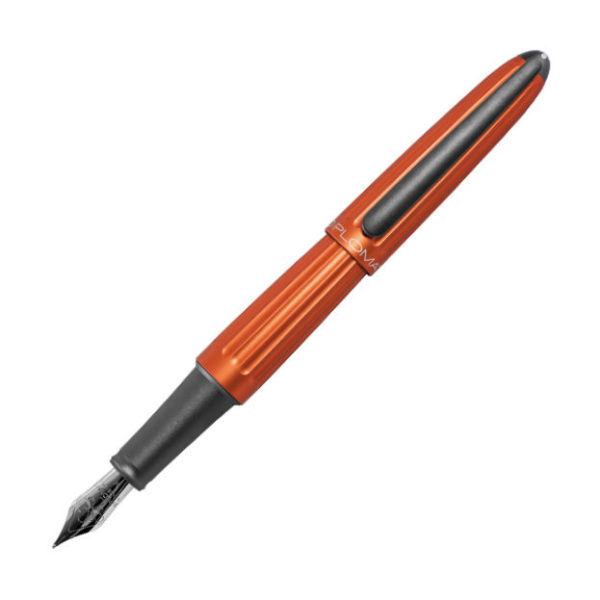 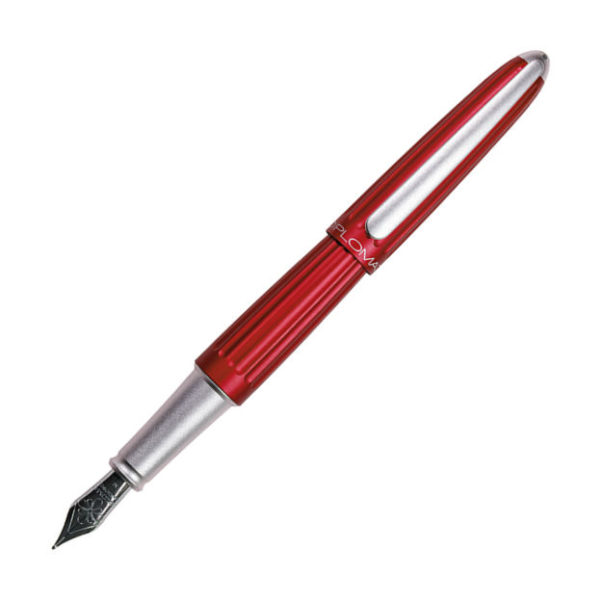 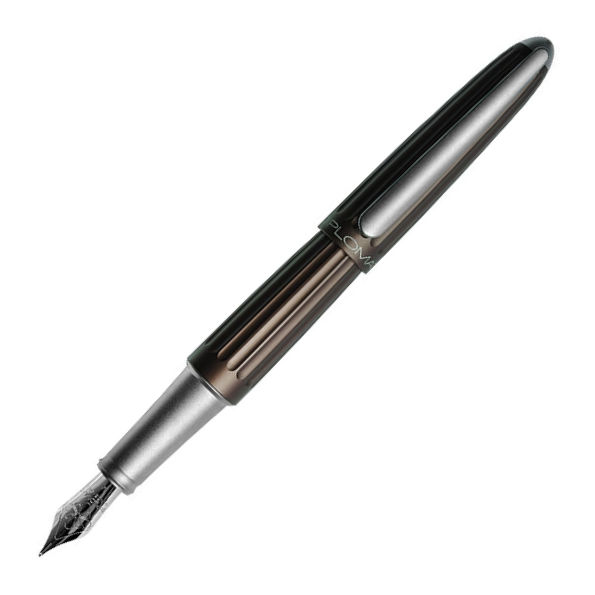 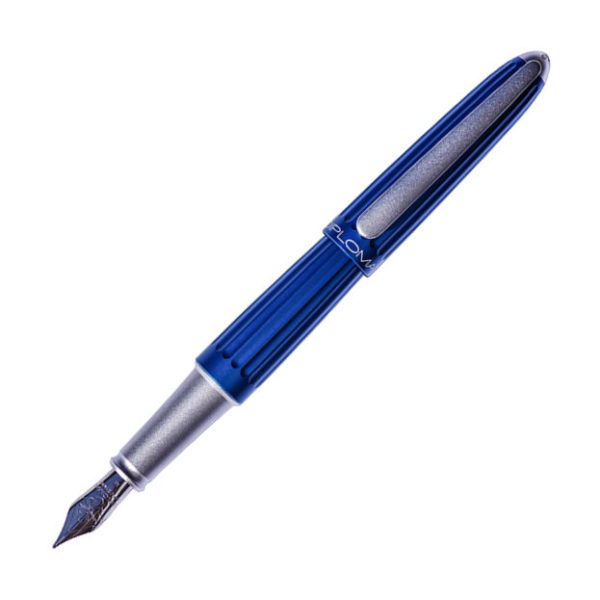 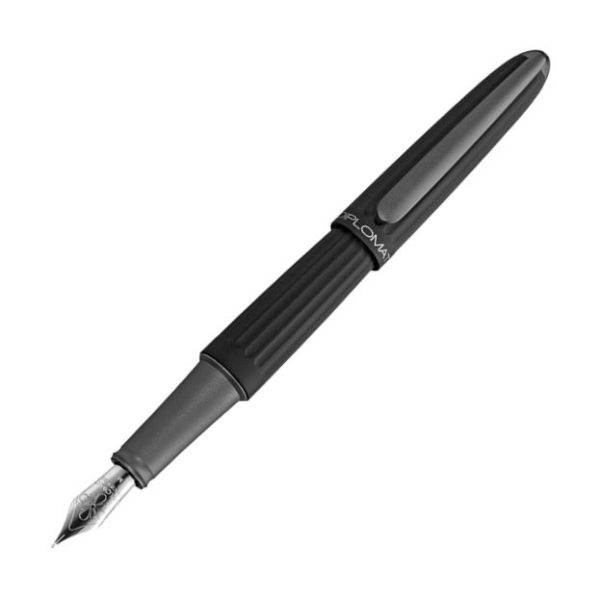 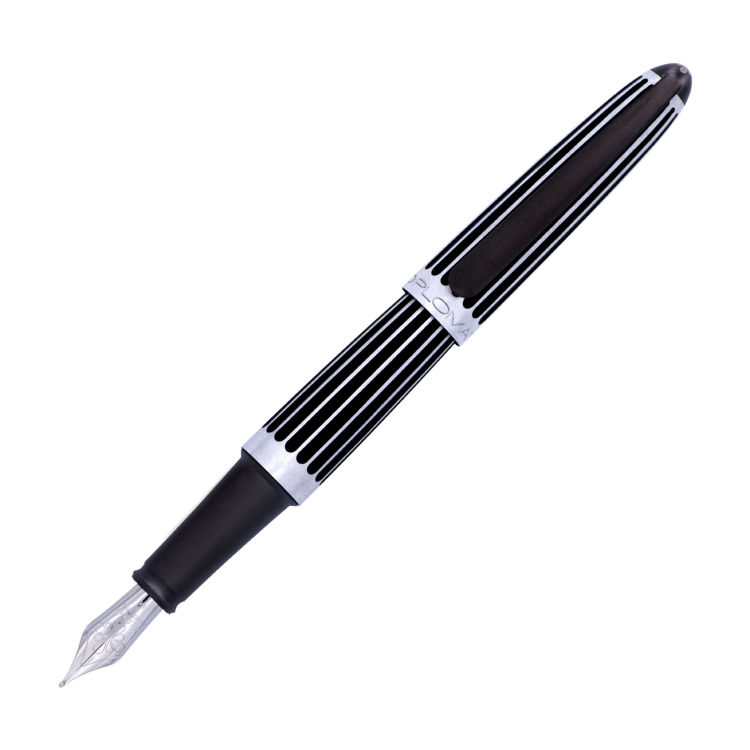 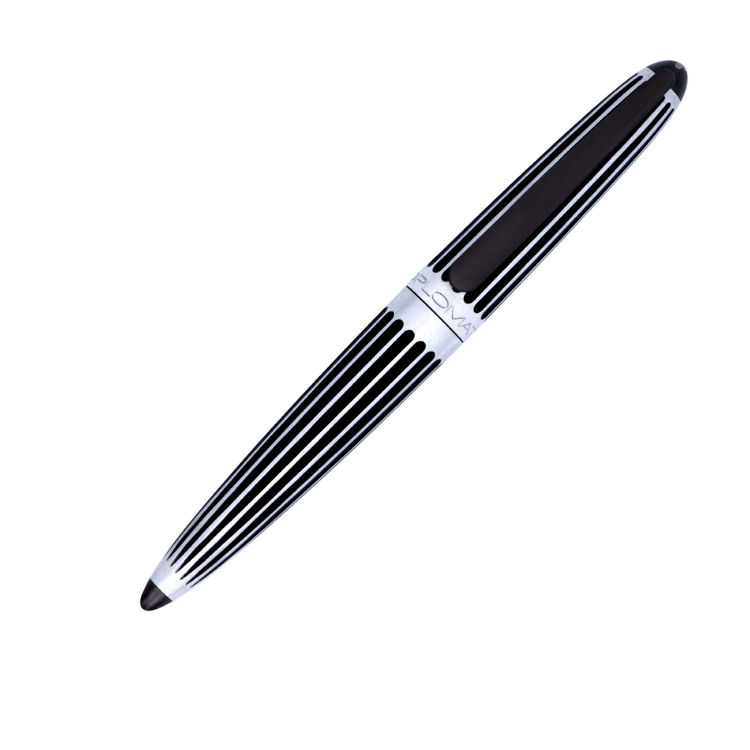 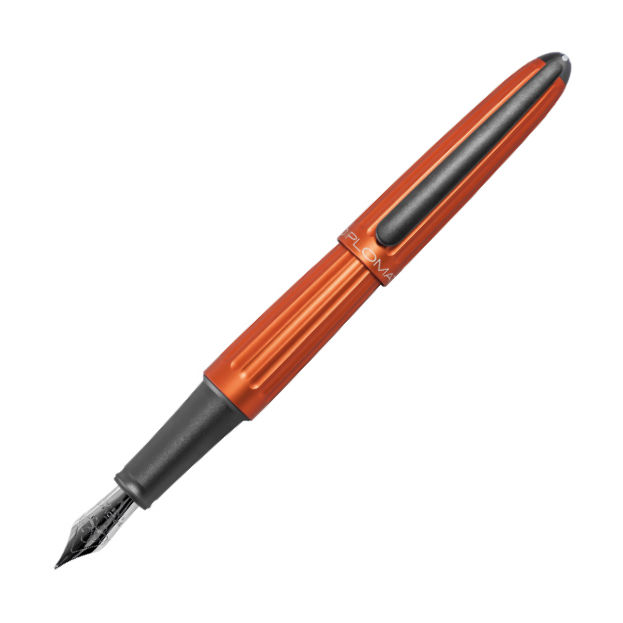 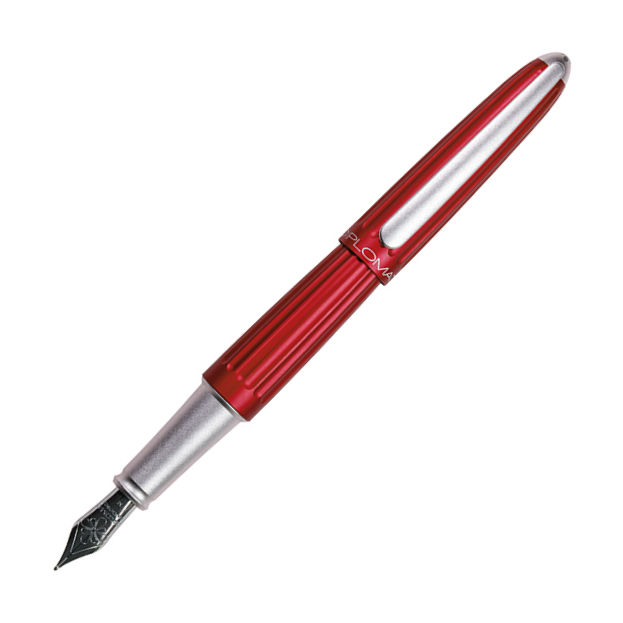 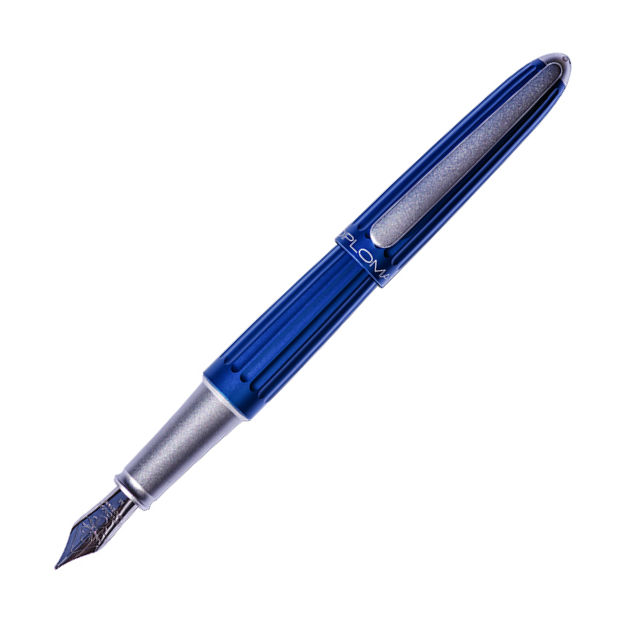 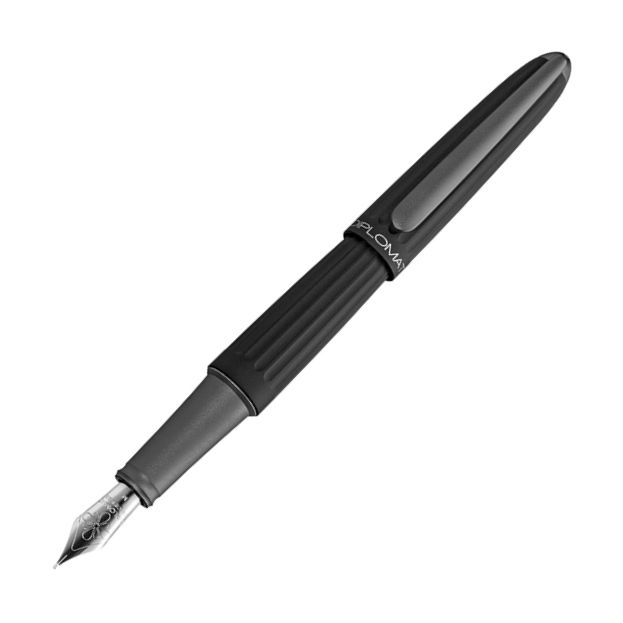 The Diplomat Aero fountain pen is a delight to look at and to hold. With a body and cap made of anodised aluminium, patterned with longitudinal grooves, this is an extremely stylish writing instrument. And if there appears to be some similarity to a dirigible airship when the pen is capped, then that is deliberate, because Diplomat originally released the Aero to commemorate the first flight of the famous Zeppelin airship in 1900.

A pen made entirely of aluminium might be expected to be absurdly light, but the Diplomat Aero fountain pen is, in fact, of a pleasing heft, and the way in which the pen tapers from the ends to the middle means that the centre of gravity is right there in the hand when writing, and the all-metal manufacture ensures that the Aero is highly shock-resistant. The cap will post deeply, but the Diplomat Aero is of sufficient size that it will fit most hands comfortably without.

There are now five variants of the Diplomat Aero fountain pen, four of them in coloured anodised aluminium, but the fifth and latest pen is in “Factory Finish”, that is, in polished aluminium (which Diplomat themselves describe as “raw aluminium“) that shows off this luxurious pen’s design features most beautifully. The clip, section and finials are also of aluminium, and are made to compare or contrast with the principal colour of the cap and pen – matt aluminium for the brown and matt silver versions, and black for the others; the clip is sprung to keep the pen firmly anchored in pocket or bag when not in use. Diplomat’s name is around the cap-band in a stylish font, and the Aero’s cap also features Diploma’s eight-lobed logo on the finial, which on this pen looks delightfully like a propellor for the airship. The cap is a push-fit so, although there is a significant step between the barrel of the pen and the section, there is no screw thread to irritate the hand in an extended period of writing.

Originally, the Diplomat Aero fountain pen was fitted with a steel nib (that was highly regarded in pen reviews, compared by some to other gold nibs), but it is now available with either the original steel nib, or with a luxury 14-carat gold nib, bi-coloured with platinum. Both the steel and the gold versions of the nib are available in Extra Fine, Fine, Medium and Broad. The quality of these Diplomat nibs is what we have come to expect from writing instruments made in Germany.  GOLD NIBS ARE AVAILABLE TO ORDER AND WILL TAKE AN ADDITIONAL 5-7DAYS.

We at Write Here love the design of these pens, and are pleased to be able to offer the Aero for you to buy online, or in person from our shop on the High Street in Shrewsbury, in the UK.