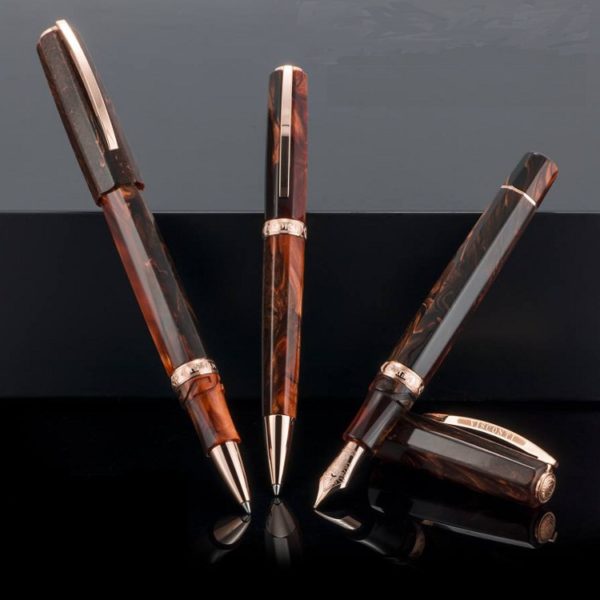 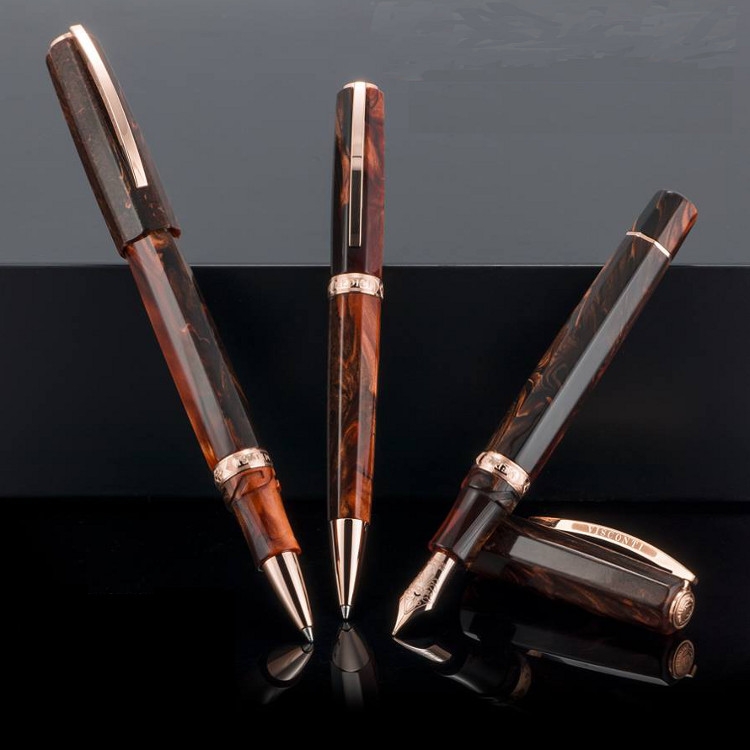 The Visconti Medici Rose Gold Rollerball pen is an impressive writing instrument. In common with other Visconti’s rollerballs, it now uses the oversize body, as Visconti have ceased making medium-sized pens. In this case, though, big truly is beautiful.

The Visconti Medici Rose Gold rollerball has been produced in Florence by Visconti to celebrate one that their city’s most famous families, the Medicis who were such patrons of the Arts and the Church – in fact, the Medici series of pens have eight-sided barrels and caps in imitation of the Baptistry of the Florentine cathedral, with which the family were so closely involved.

The Medici Rose Gold range of pens are made of Acrosilk, a mixture of acrylic resin and fibres of pure silk that gives a beautifully smooth finish that makes these pens a delight to hold. The Visconti Medici rollerball is also a feast for the eyes, with the glorious mixture of deep yellows and browns that Visconti have called ‘briar-wood’ in emulation of the luxurious materials used in the Medicis’ palaces. The accompaniments of the pen are in palladium, plated with rose gold, including the trade-mark Ponte Vecchio sprung bridge clip that is so obviously made in Italy. As with all Visconti pens, the cap finial can be replaced under the “My Pen” system to personalize the pen with your initials, and the cap is held firmly in place by Visconti’s “push-and-twist” bayonet locking system when the pen is not in use.

As with the Divina range before, so also are the Medici rollerball pens and fountain pens designed according to the Divine Fraction – 1.618 – that gives such a pleasing proportion to look at and to hold.

The Visconti Medici Rose Gold rollerball pen has a 23 carat Palladium tip, plated with rose gold to match the pen’s trim, and uses Visconti’s own A40 rollerball refill, of which one is supplied. These pens are dispatched in Visconti No2 presentation box (pictured).

Please allow 4-to-7 days for dispatch.